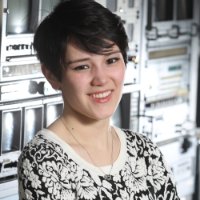 Elisa Tang found her love for storytelling at the age of five; with her pen and pad in hand, she chatted with strangers around Central Park about their lives, as her father played baseball on the nearby field.

Now, at 22-years-old, Elisa is a Gracie Award-winning journalist, pursuing her dreams of becoming a digital news producer. After graduating with a BA in Broadcast Journalism from Hofstra University in May 2015, she started working as a Production Assistant at NBC’s Today Show. She assists the show’s editorial team in creating a rundown for the #1 rated morning news program, while pitching newsworthy content for the show, and coordinating with the editorial, technical, and commercial divisions of Today. Prior to her job at NBC, Elisa balanced school work and work as a Production Assistant at MTV Digital for a year. Nearly a year after her internship with MTV.com, she joined the team to build creative content for the MTV Movie Awards and the 2014 VMA’s; as well as to work on digital content for a variety of MTV’s shows throughout the week.

Throughout the four years of her undergraduate career, she gained professional experience from her internships at, CNN’s Anderson Cooper 360, NBC’s The Today Show, MTV Digital, and Fox 5’s Good Day Street Talk. Also, she established a presence on Community on BuzzFeed, where she creates various posts. She is grateful for her mentors in New York Women in Communications, through which won the 2014 NYWICI Scholarship Award.

-Movies: ALL! Even including Charlie Chaplin’s silent films.

-Music: Elisa is a HUGE music junkie. She loves pretty much everything, but Classic Rock will always have her heart.

Brown and Wooden
Finding My Sunshine

Slightly inane ramblings of a wife, mother, and someone who happens to have Bipolar 1 disorder

A contrast between elegance and grunge.